by GrizzlyGuy
I felt like doing a long ride yesterday so I plotted a route from Boca to Hallelujah Junction (Hwy 395 & Hwy 70). I figured this might be part of my route to Oregon. Unfortunately, the key road I needed north of Dog Valley was closed: A good day with 102 miles total, but I'm disappointed that I was denied on my Oregon route. Looks like I'll have to head back to Plumas NF and push further north through there.
by EigerMike
awesome ! great pics

by Kodiak
that is awesome Grizzly Guy,
that peavine peak sounds like a blast

Angelo
by auendave
nice pics sound s like a great ride
by Ken
Moved it for you.

I seriously doubt Highway patrol in Nevada would give a rats...since the tracks are private property. Only the Train police (and yes, they have them) would do something. Possible encounter, but highly unlikely. That said, I don't blame you.
by GrizzlyGuy
No Angelo, I didn't snow any snow drifts at all. Just a few patches off to the side of the trail. Don't worry, there is still plenty of snow up in the high country to the west. The north-facing ridge here at the house is still mostly covered.

by Kodiak
yes i do my favorite "wrong turn" took us up a trail next to a creek but the creek had overflowed its banks and was running down the rocky trail it was pretty cool.
by GrizzlyGuy by Ken
Got it Eric,

Thanks. I'll call at some point. It shows points, not tracks on Google Earth. So I'll just tell you what we were trying to do. We can look together and see what your opinion is....
by GrizzlyGuy
Ahhh... I didn't realize you were part of the Kendo party that discovered that flippin' awesome uphill!

I have those two trails color-coded yellow so that I don't accidentally turn onto them and ride down them. There are trails and intersections all over up there, it is kind of confusing. Next time, I need to explore the stuff to the NNW from the peak.
by Ken
No...I wasn't there.

I'll send you a KMZ of moonrocks...so you can see it.
by hemingray
What waypoint was your first picture at - TOI003?

As for your sliding - I know the 700 is a whole lot lighter on the front end than my 660. I have to remember to load the front with some weight or it wants to wheelie on some climbs or rocks going uphill. I wonder if you just aren't getting good braking traction on the front (assuming you are in 4-low) for loose stuff. After going up the sporty trail to English Mountain, I was sweatin in 4-low coming down that thing on the stretches of loose shale-y stuff.
by GrizzlyGuy
Interesting. Instead of riding the tracks north from Bordertown, I should have turned onto the pavement and tried to cross 395. It looks like there are some trails on the sat view that would get you around Cold Springs. 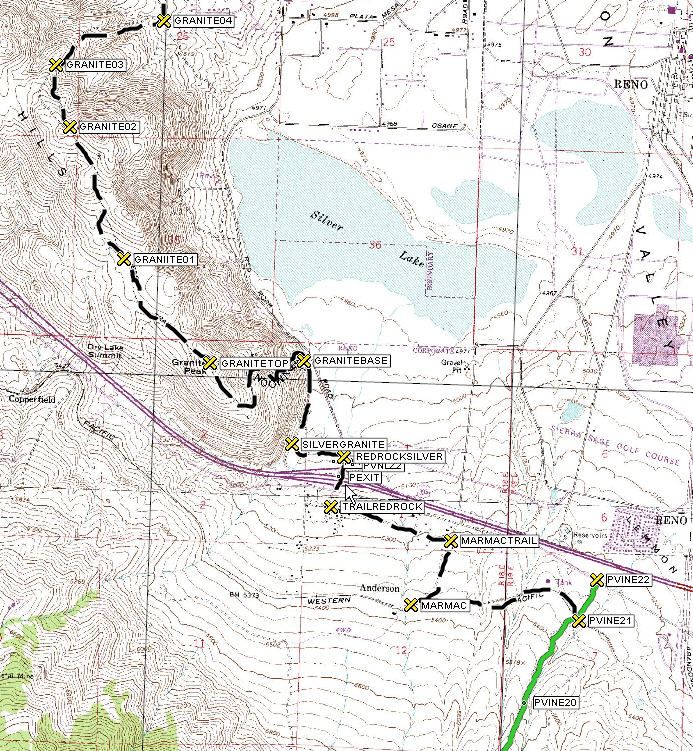 Of course I have no idea if any of that is gated off.
by Ken
Friday?

by GrizzlyGuy
Sure, we could give it a go on Friday.