4 Days in the Sierras

4 Days in the Sierras

Flyin Boy and I did 4 days of riding up here last week.

We started on Tuesday by heading up the Hunter's Lake trail out of Reno. Ended up riding 90-ish miles that day. Once up on top we followed two roads south to their ends on the border of Mt Rose Wilderness. Then we headed west and ate lunch under a railroad bridge on the Truckee River, just a few miles downstream from the Hirschdale/Boca Reservoir I-80 exit: Unfortunately there is a locked gate there, so you can't ride all the way to pavement at the Hirschdale exit. We went back up then down to Boomtown. Great views from the radio tower hill on that end of the ridge: On Wednesday, we rode from Plumas Pines, out behind the Beckwourth ranger station near Graeagle. 40-ish miles later we dropped off our camping gear at Poker Flat and setup the tents:

Hopped back on the Grizzlies, crossed the stream and headed south. Stopped at Saddleback LO, great views from there: We rode on down to Downieville and tagged the canon on Hwy 49. We DID NOT ride 100-ish more yards into town as we'd heard that they are none too friendly to ATVObsession riders: 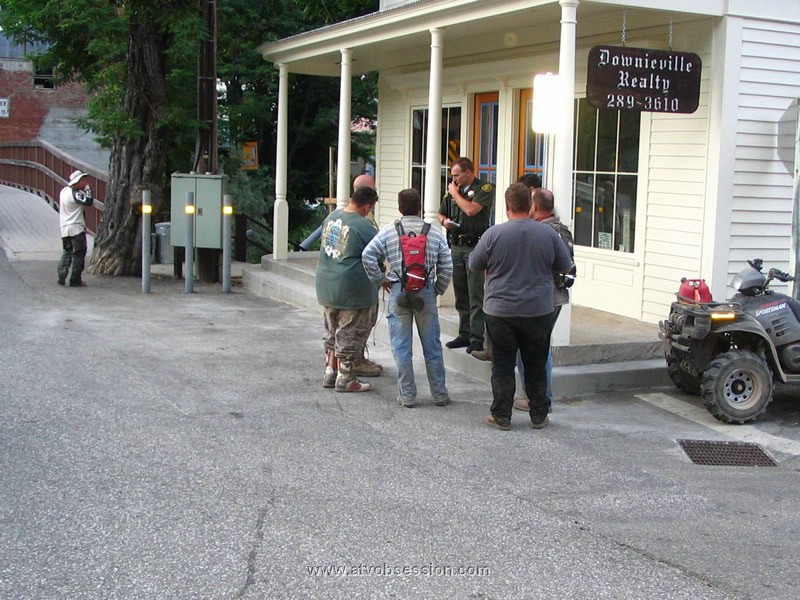 Back up into the mountains we went. We rode the ATV trail across Fir Cap on the way. Here is Fir Cap (the plateau) as seen from Saddleback LO:

Found a promising looking hang glider launch up there. Unfortunately, we couldn't fit our gliders on the Grizzly racks so no flying that day.

As we hit the end of the ATV trail where it turns back into a road, we almost had a head-on with a pickup. It was Michael, the Saddleback lookout dude that we had met earlier (in picture with Flyin Boy above). He had caught a rattler at the LO and was bringing it down to release it: I asked if he'd mind me killing it so that we'd have something good to eat for dinner that night. He said he'd rather I didn't. Rats...

Michael has a web site and takes way better photos than me:

We headed on back toward Poker Flat. Rode a bunch more stuff on the way including a cool trail that heads out to Chimney Rock. Had to turn around on that one, there was a seriously narrow and off-camber section with a steep, l-o-n-g drop off. Flyin Boy and I are both afraid of heights, or at least heights with edges, so that was a no-go for us. Of course being at 18,000 feet in hang gliders doesn't bother us a bit (no edges). Go figure.

Rolled back into Poker Flat after dark. Ever notice how much ATV headlights suck when you really need them? We did.

Woke up the next morning and rode a bunch of the trails that take off from Poker Flat. Lots of mining camps although no one was there. Maybe they just come out on the weekends?: Headed back up into Plumas and on up to Mt Etna where the vertical ventilation shaft is (here is an old picture from that spot): Headed toward Gold Valley and had lunch at a spot with a suitable view (of 3 remote lakes):

Didn't ride all the way into the valley this time, figured we'd save that for next time as there are some great camp sites down there.

On Thursday we did a half-day out of Cisco Grove. Rode the switchback trail, the trail below Upper Lola lake, and one of my favorite play-on-granite trails east of Fordyce Lake (runs by Mossy Pond): A fun 4 days and my back held up surprisingly well. The only disappointing thing is that we didn't get to eat that plump rattler!

awsome pics !!!!! i did watch your spot a few times too!
South Side Keeper

Nice Trip Eric...Jealous.
The last words spoken before a YouTube video is filmed: "Hold my beer, now watch this..."

I'll agree four days in country like that I am very jealous. great pics.

Everyone - do NOT miss the gallery that GG put a link up for. The Saddleback LO guy has a lot of AMAZING pictures.

My favorite is here - what a wow factor.

It is worth your time to check it out.
Wherever I go, there I am

Awesome pics and a great story to go along with. Its a shame more towns don't realize that us showing up in their towns helps their local economy. I try and not spend ANY money in any town or borough that doesn't support ATVs.

I've been told I joke around too much.
So one day I tried being serious.
Everybody laughed!

Yeah it's one of the things I love about central Utah... they're very big on ATVs out there. Most of the towns let you ride into town to get gas, food, motel, etc. A few don't, but most do.

I'm SO itching to get back out there for a week or so...

Great pix, GG, and great narrative to go with it!

Thanks guys, we had a lot of fun.


EigerMike wrote:awsome pics !!!!! i did watch your spot a few times too!

Cool! We had it on the whole time, but it seemed to malfunction on day 1. The first point didn’t get logged until we were riding down the other side of the mountain toward the Truckee River for lunch. Dunno what happened to the morning points, but it makes me think twice about depending on SPOT in an emergency.


traildad wrote:Did you base camp or take your camp with you?

No base camp, we did our usual all-gear-onboard kind of trip. It felt really good to dump the camping gear and 1-each of our spare Kolpins at Poker Flat. The grizzlies handle like crap with all that weight on the front rack. Reminds me of the days before quads had power steering. Yuck, too much work for a lazy guy like me!


hemingray wrote: Everyone - do NOT miss the gallery that GG put a link up for. The Saddleback LO guy has a lot of AMAZING pictures.

Yes, is he good or what? For example, here is one of my hummingbird-at-lookout pictures:

And one of his:

Makes me want to just leave the camera at home.

Wildhorse800 wrote:I try and not spend ANY money in any town or borough that doesn't support ATVs.

RobG wrote:Yeah it's one of the things I love about central Utah... they're very big on ATVs out there. Most of the towns let you ride into town to get gas, food, motel, etc. A few don't, but most do.

I'm SO itching to get back out there for a week or so...

Yup, riding all-gear-onboard in Utah is something that everyone should try at least once. Being able to cruise into towns for gas or the occasional motel/shower is unbelievably cool and you can really do some miles. We did a 6-day, 633-mile loop in 2006, kind of made it up as we went. There are so many trails out there that you always have options.

GrizzlyGuy wrote: Cool! We had it on the whole time, but it seemed to malfunction on day 1. The first point didn’t get logged until we were riding down the other side of the mountain toward the Truckee River for lunch. Dunno what happened to the morning points, but it makes me think twice about depending on SPOT in an emergency.

I have read that the spot casting has a lower priority in the system. This lowers the percentage of track points that get through. I have done a lot of experimentation and it has always been hit and miss. For the most part the OK messages always get through.

I just got an email from spot announcing a new and improved better and lighter spot device. Current users get a discount.

Yeah that new SPOT looks neat. I may have to upgrade if they give us enough of a price break. I won't be subscribing to the Spotcasting bit again, though. I never use it.

I wouldn't mind going back to a satellite phone, but the iridium system is EXPENSIVE, and the Globalstar one, while getting better, may be out of the question since I've been locked in a bitter billing dispute with them for the better part of three years. I canceled my account like 3-4 years ago and they've kept billing me, and don't want to admit they're wrong. Heck I was hesitant to even get a SPOT because Globalstar owns it.

One of my favorites

Chadd wrote:One of my favorites

Users browsing this forum: No registered users and 5 guests